is located at 3235 Teamon Road, Griffin, near the Henry/Spalding county line.  We are “Friends of Christ Making Friends for Christ”.  Organized in 2005, Christ Our Savior is a member of the Florida-Georgia District of the Lutheran Church-Missouri Synod, which was founded in 1847. 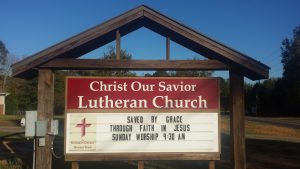 Located at 3235 Teamon Road, Griffin, near the Henry/Spalding county line.

Christ Our Savior Evangelical Lutheran Church, Griffin, GA, is a member of the Florida-Georgia District of the Lutheran Church-Missouri Synod (LCMS).

Founded in 1847, the Lutheran Church-Missouri Synod (LCMS) is a denomination that holds to the historic Christian faith, believes in the inspiration and inerrancy of Scripture, and understands The Book of Concord to be a true exposition of the Word of God.

The LCMS operates the largest Protestant parochial school system in America, including seven universities, and two seminaries (Concordia Seminary – St. Louis and Concordia Theological Seminary – Fort Wayne), as well as the third-largest Protestant, church-owned publisher, Concordia Publishing House, whose Arch Books children’s series alone has sold more than 60 million copies.  The LCMS is also known for the world-wide, mass-media outreach of “The Lutheran Hour.”  In the last five years, the LCMS has awarded more than $35 million through more than 900 domestic and international grants for emergency response and disaster response.

The Mission Statement of the Lutheran Church-Missouri Synod

“In grateful response to God’s grace and empowered by the Holy Spirit through Word and Sacraments, the mission of The Lutheran Church—Missouri Synod is vigorously to make known the love of Christ by word and deed within our churches, communities and the world.”

Mission:  “To serve, assist, and encourage congregations in the ministry of Jesus Christ.”
Vision:  “People of the Florida-Georgia District are equipped, empowered, engaged… connecting people to Jesus.” 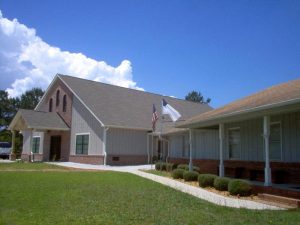 Christ Our Savior was a mission plant of Holy Cross Lutheran Church, Riverdale, Georgia.  The first preaching service in Henry County was held in May 2003 at North Mt. Carmel Park.  These services were held in an open air park pavilion, led by Rev. David Hansen (who served until 2007), and continued throughout the summer until the cooler fall weather sent the services indoors to the nearby Peachtree Peddlers Flea Market.  Christ Our Savior was officially organized on February 24, 2005.  In November 2005, the church moved to a storefront location in Hampton.  Christ Our Savior was chartered as a congregation of the LCMS on May 21, 2006.  In 2007, Christ Our Savior purchased land and a house on Teamon Road in north Spalding County.  The house was renovated to accommodate worship services and Sunday School classes.  Later that year, Rev. Larry Townsend was called as the pastor.  In 2010, the current sanctuary building was constructed, while the house is still used for fellowship, Bible study, and Sunday School.  In 2016, Rev. Townsend retired.  The next year, 2017, Christ Our Savior called and received Rev. Joseph Warnke as pastor. 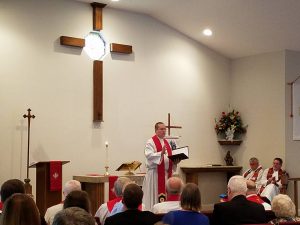